This revolutionary new approach to spine fusion is facilitated by a unique invention of a compressible, pre-sized, pre-shaped sac with porous upper and lower surfaces that is filled with grafting material.

Disc Disease when the symptomology is back pain with or without lower extremity pain. 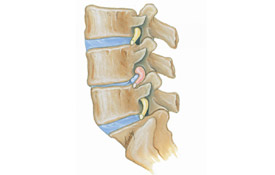 Through an incision, place a cannula through soft tissue down to and into the disc space, and then, with various instruments, remove the inner aspects of the disc and prepare the endplates.

The approach to the disc may vary, for instance, directly posterior, from far lateral transforaminal approach, from anterior, or from lateral. The transforaminal is the most popular at this time.

Once prepared, the periphery of the area to be replaced is measured by passing an expandable wire of premeasured length into the disc space. The desired length is determined by subtracting the length of the cannula and the remaining wire length from the original measurement. 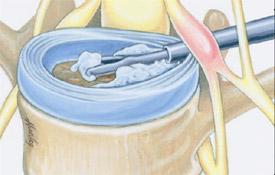 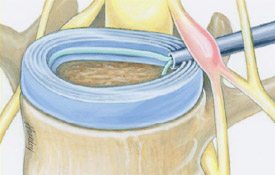 The invention is a compressible sac that is pre-sized and pre-shaped, most commonly, in the shape of a pill. This sac has a porous upper and lower surface to abut the endplates of the prepared vertebrae and a non-porous periphery; the periphery may have an enclosed expandable wire incorporated in its equator. The expandable wire deploys, once the sac is in the disc space.

The sac is then filled with grafting material, elevating the disc space while still confined inside the sac. The porous surfaces allow ingrowth and fusion from one endplate to the other. And the non-porous sides prevent premature absorption of the graft and collapse of the sac.

The disc height is increased and the foramina are enlarged, decompressing the entrapped nerves and decreasing motion of the facet joints. 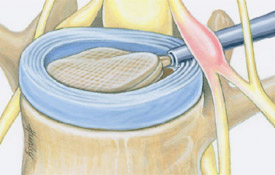 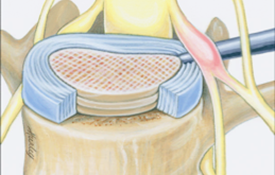 The objective of the procedure is that over time, bone will grow between the endplates and the original two vertebral segments will essentially become one and there will be no motion. Additionally, the openings where the nerves exit the spinal canal, the foramina, will be larger, putting less stress pressure on the existing nerves. The combination of the two should alleviate pain in the spine and the corresponding extremities. 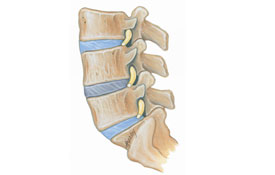 The advantages of the procedure over conventional open and other minimally invasive procedures include less operating time, less soft tissue trauma, less blood loss, less chance of nerve injury, less chance of infection, less pain, and less postoperative hospital stay. And there is less chance of fusion failure caused by absorption of the graft. 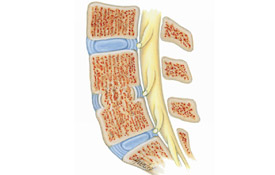 To request an appointment, please give us a call.

Visit our Patient Education page to access our full library of animations. 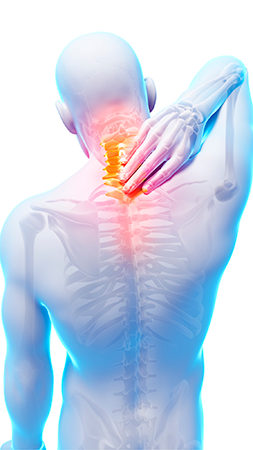